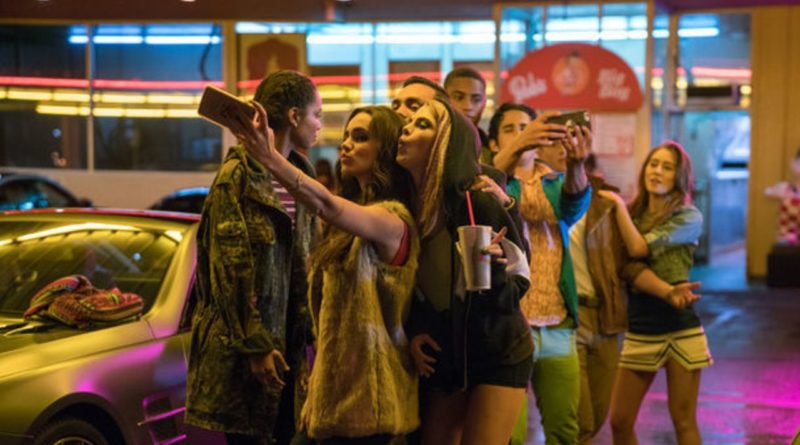 #REALITYHIGH created a lot of buzz when it premiered on Netflix in early September, and the music was essential to that success. The soundtrack already has over half a million streams, entirely off the response of viewers inspired by the music.

McHugh and Ru teamed up with a crew of musical collaborators to create over 30 songs for the Netflix high school-meets-social media drama. We chatted with them to get the scoop on how it all came together.

This film is unique in that it features so many original songs, without being a musical. How did you decide on this approach?

Lebrija: Our music budget was small so Jonathan came with the idea to bring in Ru. He created 30 songs of all different pop culture genres gave the movie a tremendous music scope. It definitely made the movie pop.

McHugh: I said, ‘Fernando, we’re doing a high school movie with a limited budget. We need to bring in Ru from the beginning not at the end as we did on “Sundown” to create a bunch of the songs and  get him to co-compose with another more traditional composer.’

Lebrija: Music is very important element in movies, especially in teen movies like #REALITYHIGH where it can make or break a film. These guys helped make it!

The films has a very fresh pop / hip hop / EDM sound. How did you find that creative direction?

Ru: Once I read the script and knew it took place in Calabasas, I connected with some people I knew there – even some high schoolers I knew there. I had them put together playlists and send me exactly what they listen to. I got very much tapped into what these kids would listen to. And that’s the kind of music I listen to, too. Right off the bat, because I did that, Fernando and the producers trusted me. And it was very authentic to me, the music I was making, so I had a easy time. This was one of those projects where I couldn’t imagine it going any better.

McHugh: It kicked off with finding one of the pre-recorded songs. It was for the cheerleading routine. The teacher puts on this Jamaican, dirty, rhythmic track that the girls dance to. And the principal – who’s played by the guy from Pitch Perfect, John Michael Higgins – he freaks out and pulls the plug on it. But not before it plays for a minute and a half.

So we nailed that cue early on. We knew that cue would probably work really well and Fernando dug it and luckily the choreographers dug it. ‘Cause they could’ve said, ‘No, this is not working for us.’ And then we would’ve had to start from scratch. But once we nailed that first track, boom. It opens the door for everything. It feels good for everybody. It starts with a positive energy.

At the pep rally, Cheer routine.

Lebrija: Since we had already done a film together we all spoke musical shorthand. The first movie we did helped us to really connect, thus they understood what I wanted to do with the film’s music as they are so versed in pop and hip-hop culture music. It was great for me to have them running my music team.

Were there particular artists that were really clutch for this project? Who were some of your key collaborators?

Ru: Most of the creative people around me are very hip, and I was able to get a lot of different artists involved in the project. I think Maxwell D, Smooth BLAQ, Matt Allenn and Vendela all have very special moments in the movie. Everybody that I collaborated with was very cool, very talented.

Kid Ink has a cameo in the movie, and that came out of all these collaborations, too. When we were looking for somebody, this guy Matt Adams – he rapped on ‘Messy’ – knows his manager and was in the studio and there were a bunch of names thrown around. I was like, “Oh, you be able to get Ink?” He’s like, “Yeah, I’ll hit him up right now.” And that same night, he was like, “Oh, he said he’s down.” And I think I set up the meeting and next thing you know, he’s in the movie.

Are there particular scenes that you thought were defining moments? The big ones that you’re proudest of?

Ru: I would say “Drop and Get Low” (above) was the best music cue, for me at least. That one has been picked up on a couple of official Spotify playlists and is getting radio play just based off the movie. There’s another song called “Messy” that McHugh really fought for.

McHugh: Yeah, the lyrics to “Messy” just worked so well with one particular scene. The song is really dark, with this hip-hop feel, but very hybrid, all slinky and growling. We also had a remix version that was more EDM, and the director thought it was too EDM. So we went back to the original and cut it in and sent it back to him and that worked.

Was there a big challenge for you creatively? Anything that was tough to make work?

McHugh: Creatively Ru and I are so simpatico that we were totally in sync, a rare thing. The toughest part for us was juggling a limited budget for all these collaborators. I don’t even know, Ru. How many people were on this? 30?

Ru: There were a lot. I think on the creative end though, even though I did 31 songs, I could’ve done three of these movies at the same time, it was very easy. The energy, the communication, everything was just so solid that I had no problems. There were a couple of times where I had to get a song done within a day. Or a day and a half. Those were times I had to double down and really work hard. But as far as the ultimate creative jobs, there was no miscommunications. Nothing like that. I think everything went as smoothly as possible.

Let’s talk about a song you’re really excited about.

Ru: I definitely need to mention “Sail Away.” It’s gotten a lot of love and radio play internationally. It’s even the number two song right now in Sri Lanka, where I’m from.

At the beach bonfire.

Ru: It’s used at the end of the movie and we wanted to end the movie on a nice note. The last whole scene from when they get to the beach, it’s just very positive, everything’s coming together. Honestly, I did the track and I was trying to get a bunch of writers and people to come in, but we didn’t have time.

Usually I do all the music but then I have other people, writers and singers, write on the rest. This one, the only reason I even wrote it because I couldn’t get somebody. We were running out of time. Even after I wrote it, there would usually be a couple demo singers to do vocals, but none of them were available, so I ended up doing it by myself.

So I wrote it and I sang it and I just sent it to Fernando just to show him. And he wanted it exactly the way it is. He’s like, “Oh, I love this song. This is probably one of my favorite songs of the thing.” And he had me leave it the way it is.

〉Check out the full list of songs featured in #REALITYHIGH