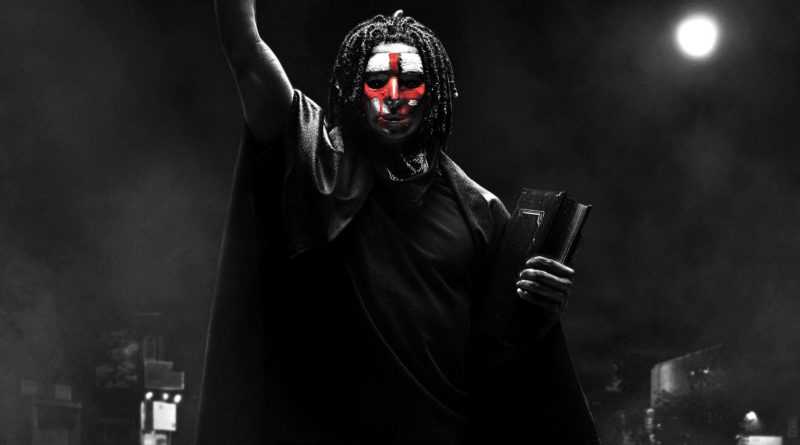 Action-horror film The First Purge has completely taken over Tunefind’s trending music charts ever since the premiere on July 4th. Charged with rebooting the sound of this established franchise, music supervisor Jonathan Christiansen delivered.

With a mix of familiar names like Kendrick Lamar and Rae Sremmurd alongside emerging artists like Shek Wes and 1PLAYY, the hard-hitting soundtrack has had fans scrambling to hunt down the songs featured in the film. It’s a big departure from the previous Purge films, which relied primarily on original score. And it paid off in huge engagement from fans responding to the fresh approach.

“What a wild ride this was!” shared Christiansen (credits include Marvel’s Cloak & Dagger, Rapture, and Underground). “We were tasked with bringing an entirely new sound and feel to an existing franchise – one which had not previously featured the amount (nor genre) of music that we intended to bring to this prequel.”

This was Christiansen’s first gig on the Purge film franchise, but he has worked with Director Gerard McMurray previously. This helped inform the creative approach and drove a more integrated, featured approach to how music was used in the film.

“We worked together on a film called Burning Sands and that (along with classics like Boyz n the Hood and Menace II Society) served as the template,” said Christiansen. “What I love about working with Gerard is his strong vision for music, and unwavering commitment to see it through. He’s really the man with the plan!”

We asked Christiansen to share some of this favorite music moments from the film and how they came together below. You can also see the full track list from The First Purge on Tunefind.

Dmitri's introduction scene, as he runs on the …

Jonathan Christiansen: For both myself and Gerard, music is so absolutely vital in setting both tone & time/place of a film. So for The First Purge we wanted set it off with something loud, in-your-face, and local. Troy is a quintessential independent NYC hustler, placing him in clear parallel to our lead character Dmitri (Y’lan Noel). He even put up money to film his own Purge music video!

JC: The ‘Purge Party’ is such a significant element of the film, from both the plot’s perspective (most people really aren’t that evil & violent, after all) but equally in regards to music. This was the very first song we locked into the film and it absolutely set the tone for the rest of the turnt up party moments, in energy as well as lyrics—”thank god that I’m alive!” We shot the scene with this when it was still a demo track, and despite the single eventually being released a few months ahead of the film’s release, we knew there was no way we could replace it!

Dmitri and his crew check their weapons in the …

JC: This is an original song we had recorded for the film – a collaboration between Kanye-signee Desiigner and the film’s extremely talented composer Kevin Lax. We were blessed that Desiigner made a brief cameo in the film, and from there we recognized the potential to expand his contribution into the soundtrack. Desiigner’s presence ended up becoming an essential ingredient to the film, sonically. His dark, frenetic energy really speaks in a palpable way to the frenzy that breaks out on the violent, abandoned streets of New York. Both “Reaper Cometh” and another song of his “Up” were featured over major montages.

Teens work out at the Stanton Island Youth Cent…

JC: Really nothing makes me happier than being able to feature music from independent/unsigned artists. After auditioning probably hundreds of other songs for this spot from various labels and publishers and coming up empty, our coordinator Justin found this song on a Spotify playlist in the eleventh hour. As luck had it out, Curly Sav was in town from NYC and came by the office hours later to sign the paperwork. Just shows you that the process of finding music can be sometimes chaotic and last-minute, but in the end, artists who write great, unique songs get the win. It all starts and ends there.

JC: In 50 years, I personally think this will be considered one of the most important hip-hop records ever written.  In a time where our country is clearly taking steps backwards, the honesty and resiliency in Kendrick’s storytelling is unparalleled. The chorus became the chant which permeates through #BlackLivesMatter marches and protests of all kinds. As The First Purge is a prequel, we already know that the experiment and killing does in fact continue (and only grows in prominence). Despite this fact (and that it’s fictional — at least for now), we felt it was important to still deliver a meaningful message, and conclude on a note of resiliency and optimism. We are so grateful Kendrick allowed us to include this song in the film.