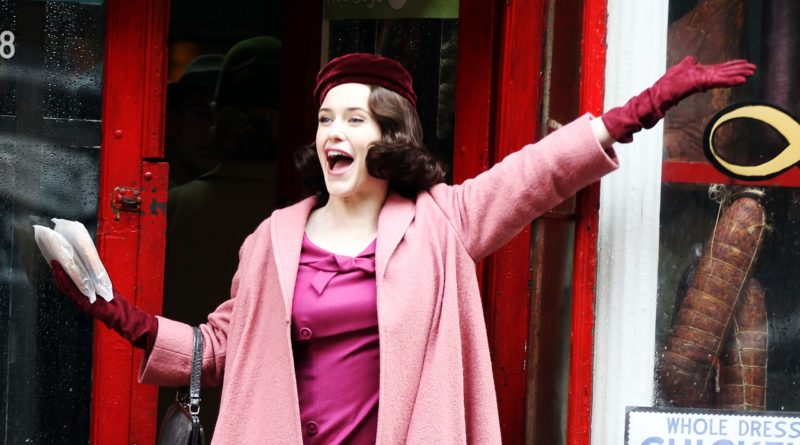 “I am honored that The Marvelous Mrs. Maisel is the second show ever to win an Emmy award for music supervision,” Urdang told Tunefind about the big moment. “I wish I thanked everyone properly when accepting the Emmy, but my nerves took over. My glasses accidentally flew behind me (thank you, Dan, for picking them up!) so I couldn’t read my speech, nor could I remember a single word.”

Given the chance to do it all over, Urdang highlights the show’s visionary creators, Amy Sherman-Palladino and Dan Palladino (also behind the cult favorite show Gilmore Girls) and the creative team behind the show.

“I am most appreciative to Amy and Dan for inviting me on to the show,” said Urdang. “We have the best team to work with, in all departments. We are all intertwined and work together from the music team to the casting, to the editing, and sound and Assistant Directors and more.”

The Emmy-winning pilot episode introduces us to relentlessly perfect Jewish housewife Midge Maisel (played by Rachel Brosnahan) in late 1950’s New York. Poor Midge’s perfect life quickly unravels, (spoiler alert!) as she learns her aspiring comedian husband has been stealing his jokes and sleeping with his secretary on the side. By the end of the episode we realize that Midge is the one with the real comedic chops in the family, and viewers are hooked to find out what happens next for this feisty leading lady.

Splitting time between that proper housewife-turned-working-divorcée existence on the Upper West Side and the gritty underground comedy scene in the Village, the show uses music artfully to help bring viewers back in time. Scenes are soundtracked by nostalgic hits by the McGuire Sisters, Peggy Lee, Connie Francis, and more. Urdang credits her industry contacts for their critical role in helping her find – and license – the perfect song for each moment.

“As a music supervisor, it is so important to have great people at the labels and publishing companies to work with – we couldn’t do our jobs without their music pitches and clearances,” said Urdang. “And on this show, especially, everyone works so hard to help us out.”

Of course, one particular song required going above and beyond.

“For the pilot, one of the greatest triumphs – and relief! – was getting Barbra Streisand’s blessing to use her song ‘Come To The Supermarket (In Old Peking),’ shared Urdang. The Cole Porter tune from Streisand’s first album is featured in a fast-paced montage that introduces the vibrant scene of the Village at night.

Come to the Supermarket (In Old Peking)

While Streisand rarely licenses her music, Urdang and her team were persistent.

“It took letters from Amy and sending a link with a video clip of the song used in the scene, and months of patience,” recalled Urdang. “But the day after Trump was elected we saw that the link was viewed and immediately after that we got the approval to use the song.”

It was a clutch clearance for the pivotal pilot episode, and the team was relieved that Streisand appreciated the creative vision of this new and unproven series. (The singer even approved the use of a second song, featured later in the season.)

“The scene was written with that song in mind, shot to the song, and there was just no alternative had we not gotten the okay,” said Urdang. “The pilot was also where we realized that music is truly central to the show, and we started using songs as score, on camera and as source. Wait until you see Season 2!”

Urdang won’t give away any spoilers, but the teaser trailer dropped in August promises more hijinks and hilarity in season 2 as Midge tries to balance life as a working mother and aspiring stand up comic. We’ll see Midge and her caustically endearing manager, Susie, embark on a Borscht Belt comedy tour through the Catskills, and Midge even makes her way to Paris.

While you wait for new episodes of The Marvelous Mrs. Maisel (already renewed for a third season), you can check out other shows and movies music supervised by Robin Urdang. Her projects include television shows like Younger, as well as the films Call Me By Your Name, The After Party, and the upcoming Suspiria.

The Marvelous Mrs. Maisel has won a total of 3 Emmys so far (the comedy awards for casting and single camera picture editing, as well) during the Creative Arts portion of the Emmy Awards that took place last weekend. The series is still up for another potential 6 awards during the prime time awards show broadcast on Monday, September 17th at 8 pm est/5 pm pst on NBC.

At Tunefind we track all the songs featured in the series. Here are some of the most popular songs, according to viewers of The Marvelous Mrs. Maisel.

by The McGuire Sisters

by The Roar of the Greasepaint – The Smell of the Crowd Ensemble, Cyril Ritchard

(0:05) Midge celebrating getting the rabbi; she…

by The Barry Sisters

from The Marvelous Mrs. Maisel Soundtrack · Season 1 · Episode 8 · Thank You and Good Night

from The Marvelous Mrs. Maisel Soundtrack · Season 1 · Episode 4 · The Disappointment of the Dionne Quintuplets

〉Songs from the Emmy-winning pilot episode of The Marvelous Mrs. Maisel