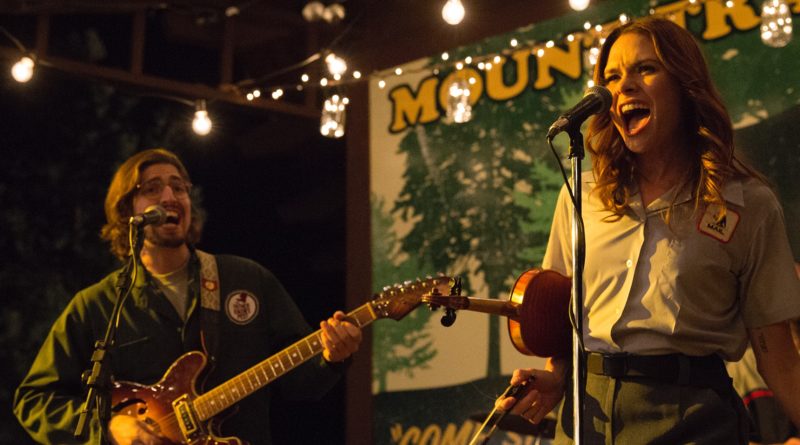 “When I was drunk at a Hayes Carll show and I thought ‘Maybe it would be fun to have live music at the end of every episode of The Guest Book’ I had no idea how wonderful it would all turn out,” recalls show creator Executive Producer Greg Garcia.

Ben Jaffe and Suzanne Santo – better known together as honeyhoney – have proven to be clutch players in the TBS sitcom, closing out each episode with a cover or original song they’ve written especially for the show. These end montages help tie the season together, introducing the new characters appearing in the next episode of this anthology series set in a woodsy vacation cabin. Each song is performed live by Santo and Jaffe at Chubby’s, the local strip club.

The multi-talented duo kicked things off in the premiere episode with a cover of ‘I Need Never Get Old.’ Originally by Nathaniel Rateliff & the Night Sweats, The Guest Book had viewers on the hunt for this new version.

I Need Never Get Old

from The Guest Book Soundtrack · Season 1 · Episode 1 · Story One

Eagle-eyed fans recognized honeyhoney performing onstage in the episode, later confirmed by Garcia and The Guest Book’s music supervisor, Jonathan Leahy. But it’s only now that fans can get their hands on the songs featured throughout season one, finally available via a soundtrack album. (Get it now: Amazon | Apple Music | iTunes | Spotify)

This unique approach of having a “house band” for a TV show required some creative thinking on the part of Leahy. And, of course, the perfect band.

“[Greg] called me up to ask if this was something we could pull off, and of course I was thrilled to give it a shot,” said Leahy. “Early on I think we agreed that the format which might work best was a male / female duo. I sent Greg a bunch of ideas, artists I knew and loved, having no idea if we could get them or not.”

Of the artists considered, Leahy had known honeyhoney for about a decade, following their early career when they were signed to Ironworks (Kiefer Sutherland’s label with musician Jude Cole). Over that time they had released three albums and built up a worldwide following for their bluesy alt country Americana sound.

“They’re both exceptional vocalists. Either can sing lead, either can harmonize,” Leahy observed of Jaffe and Santo. “They’re also both multi-instrumentalists, which is crucial. There’s acoustic guitar, electric guitar, fiddle, banjo, drums, bass, hand percussion and keyboards on these songs, and they’re all played by Ben and Suzanne. Not many duos can pull this off while also delivering incredible vocals.”

“They stood out to me right away and after sitting down with them and discussing the show it was clear we were all meant to work with each other,” said Garcia, who also created the cult hit sitcom My Name Is Earl.

“When we first met Greg, we had a meeting in his office that is decked out, double wide trailer style, equipped with wood paneled walls and taxidermy,” said Jaffe. “We were mostly just trying to figure out who the hell this genius man was and were stoked that he and Jonathan wanted us to be a part of the project.”

But the two were up for the unusual adventure and after a few phone calls to work out details, Jaffe and Santo signed on. And Leahy realized that would open up some interesting possibilities.

“I think the concept began as ‘let’s just pick ten songs for them to cover,’ recalls Leahy. “And then once we had honehoney on board and we knew what great songwriters they were, we thought ‘well maybe we should have them read the scripts and try writing some originals that kinda fit with the stories.’”

One of those originals: ‘One Too Many’s Not Enough,’ which was featured in episode three.

One Too Many's Not Enough

While Jaffe had done some previous work writing songs for television, this gig upped the ante considerably. The duo ended up writing an original song for each episode of season one, as well as the season one theme song, ‘Fine By Me.’

“It was a really interesting challenge for us, for sure. Writing songs for a scripted television show turned out to be a great exercise, in terms of taking us outside of the normal ‘song and dance,’ said Santo. “Although, no one really dances to our music. It’s more of the foot tapping sway back and forth kind of tunage.”

Leahy credits the duo as prolific songwriters who were able to keep up with the often fast pace of television.

“Since this was our first time all working together, I think the idea of using all original songs just seemed a bit too treacherous,” recalled Leahy. “So the final plan was to hedge our bets: record ten covers and ten originals, so for every episode we had a reliable backup.”

“We would audition both the original and the cover song to picture and went with the one that felt right,” said Garcia. “I’m sure in some instances I went with the cover version because that had been the song I was thinking of when I wrote the script, but we used a lot of originals too.”

“It got a little down to the wire on our end between touring and other projects,” shared Jaffe and Santo, who both write and perform as solo artists, as well. “But by the skin of our teeth we got it all down and are proud of the tunes we created.”

One clear favorite among fans and the team was honeyhoney’s original song, ‘Arrow of Love.’

“If this song had been around 50 years ago it would’ve been cut by Dolly Parton and Porter Wagoner and it would be considered a stone cold classic today,” said Leahy. “The lyrics are damn near perfect, and achingly sincere. So of course we used it to play the final moments of an episode where a murderous stripper gets shot through the breast with a crossbow.”

“The idea initially with the originals was to not comment on anything going on in the show – to be a separate storyline – but the urge to bring Cupid in was too powerful to resist,” said Santo. “It reminds us of the really heartfelt balladeers of the 50s, like Mary Robbins telling these earnest stories about something they had clearly never done or been a part of, like some shootout on the streets of Laredo or something. The songs are like mini-soap operas.”

honeyhoney’s actual performances on screen at Chubby’s were another critical component of what Jaffe and Santo contributed to The Guest Book, and presented a whole other set of challenges. The duo arrive on camera cold to deliver a believable and entertaining musical performance, all while perched precariously on the edge of a narrow stage in a strip club.

“There is literally a stripper pole between them at all times,” Leahy points out. “Ben’s floor tom didn’t fit on the stage so it sits way off to the side. He has to lean over and bend down to hit the thing. They treated Chubby’s like any other dive bar gig and just made the best of it.”

Between the originals and the covers, the team had a rich set of songs to work with. The soundtrack spans a variety of genres, eras and artists, both big names and lesser known. Though, with only about half of the recordings making their way into the episodes, quite a few gems still haven’t been heard by fans.

“I had them do a cover of Rob Base’s ‘It Takes Two,’” recalled Garcia. “I was loving what they were doing with all the cover songs and I wanted to see what they would do with a rap song. I loved it and still listen to it all the time. But ultimately it didn’t really fit into the show as well as the cover of Tim Fite’s ‘Big Mistake’ that we used in that scene.”

honeyhoney perform a cover of this Tim Fite son…

While ‘It Takes Two’ currently lives only in Garcia’s and Leahy’s personal libraries, they did gift us with one bonus track on the album.

“There’s one original song on the soundtrack that was rescued from the cutting room floor: ‘Soul With No Hope’ was written for 101 but ultimately that spot went to the Nathaniel Rateliff cover,” recalls Leahy. “Greg and I loved the track so much though that we were determined to use it somehow, somewhere. It ended up in episode 104, playing very faintly from a car radio. That’s one easter egg we’re happy to share, it’s such a great song.”

Soul With No Hope

Christy and Paul drive up to the cabin, this ho…

Leahy and Garcia also confirmed there will be a lot more honeyhoney tunes to come in season two of The Guest Book, which features a new theme song (to fit the new beachfront location) and almost all original songs written by the band. Watch for the season two premiere on October 23rd on TBS.

〉Full list of songs featured in The Guest Book

One thought on “The Guest Book Releases Soundtrack of honeyhoney Hits”