Netflix’s The Old Guard held 9 out of the top 10 trending songs on Tunefind last week. Fans immediately flocked to the pop/alternative EDM soundtrack of this star-studded action movie. 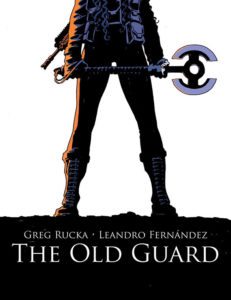 The Old Guard is based on the comic book of the same name written by Greg Rucka and illustrated by Leandro Fernandez. The superhero film was released on Netflix July 10th and quickly set records for the streaming giant. Netflix announced that the film is on track to be viewed by 74 million households in its first four weeks.

And fans were just as excited about the soundtrack for The Old Guard. The licensed music featured in the film was curated by music supervisor Julia Michels of the Format Entertainment team (credits include: A Star Is Born, the Pitch Perfect films, Trolls).

The Old Guard also features original score by composers Volker Bertelmann–also known as Hauschka (credits include: Downhill, The Art of Racing in the Rain, Hotel Mumbai, When Hitler Stole Pink Rabbit) and Dustin O’Halloran (credits include: The Hate U Give, Puzzle, Lion, Like Crazy).

The Old Guard follows a team of immortal mercenaries as they pursue a vengeful mission. Charlize Theron (Bombshell, Long Shot, Gringo) leads as Andromache “Andy” of Scythia. Andy and her team are ancient (mostly immortal) super-soldiers with healing abilities.

The Old Guard is directed by Gina Prince-Bythewood (Love & Basketball, The Secret Life of Bees, Beyond the Lights), the first black female to direct a big-budget comic book film.

The Old Guard became one of the top 10 most successful original launches in Netflix’s history just one week after release. The film has been praised for its hand-to-hand action sequences, portrayal of LGBTQ+ characters and overall franchise potential.

At Tunefind we’ve been tracking the fan favorite songs from the movie (see below), as well as the full list of songs from The Old Guard soundtrack.

Andy and Nile drive across the desert.

Nile goes into an elevator and heads to rescue …

The World We Made

In the church, Andy fights with the soldiers wh…

After the battle with Merrick, the team heads out.

The trailer uses the Brevis Remix of "Borders".

There is already discussion about a sequel. “The character of Quynh is kind of teased in this [in a flashback and mid-credits scene],” Charlize Theron shared in an interview with Cinema Blend. “There’s obviously a relationship there that we didn’t really explore in this film.”

Perhaps the sequel will feature an origin story of Theron’s character, Andy, and Quynh (played by Veronica Ngo) leading into the next action-packed conflict… Fans will have to wait and see.

〉Full list of songs in the The Old Guard soundtrack