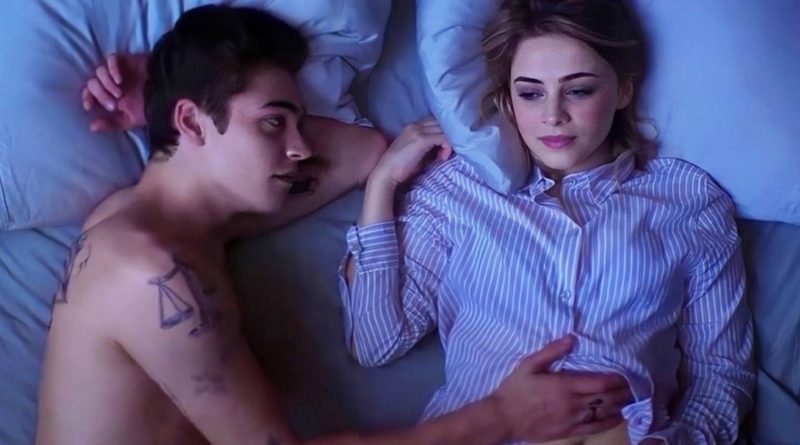 After We Collided, the eagerly anticipated sequel to 2019’s smash hit After, was released in the US a few weeks ago and fans are thrilled. We pick up the tumultuous love story between Tessa and Hardin, and once again, the soundtrack is a central part of the film. Tunefind chats with After We Collided composer Justin Burnett and music supervisors Josh Kessler and Dylan Bostick.

Justin Burnett’s original score for After We Collided was released November 18th. Burnett walks us through how he crafted some of his favorite moments from the film, while Kessler and Bostick share details about the licensed music appearing throughout After We Collided. (As always, you can find the full list of songs and music featured in After We Collided here on Tunefind.)

As with any sequel, the opening moments are critical, tapping into emotions and reminding viewers where we left off at the end of After.

“The opening of the movie brings you right back into the world of Hardin and Tessa,” shares Burnett. “That is why we made both openings so similar. We wanted everyone to immediately be transported back into the world we just came from with the first movie.”

Kessler and Bostick used the lyrics and tone of Aron Wright’s ‘You Were Supposed to Be Different” to engage viewers in those crucial opening moments. The song has ended up a fan favorite on Tunefind.

“We all loved the sentiment of the song, and initially tried it in the 9 Days montage,” recalled Bostick. “‘Love Me Or Leave Me’ [by Little Mix] ended up working better in that scene, but we still wanted to find a place for ‘You Were Supposed to Be Different’ in the film. The tone of the song and lyrics ended up working perfectly in the opening sequence to help tell the story.”

You Were Supposed to Be Different

Burnett’s score album includes a total of 13 instrumental tracks fans will recognize as setting the tone for key moments throughout the film. One of the composer’s favorites from the album is ‘Ten More Seconds,’ which accompanies a scintillating pillow talk scene between Tessa and Hardin (pictured above).

“There’s something about the scene that brings you right back into the world of young love, breakups, getting back together and those awkward moments of not knowing exactly what to do about it,” shared Burnett.

Hardin thanks tessa for staying the night for h…

As a film series adapted from novels (based on Harry Styles fanfic on Wattpad), the original bestselling books by Anna Todd served as important inspiration for the soundtrack.

“I was really lucky to have that book as it’s not often that you have a deep dive into the minds of your characters for a movie,” recalled Burnett of writing the score for After. “From there, I started with the lake scene. I had the scene looping on repeat, while I found sounds and improvised here and there with melodies, chords, etc. After a few days, something finally came together which eventually became Hardin and Tessa’s theme.”

For After We Collided, Kessler and Bostick also took their inspiration from the characters themselves.

“For many scenes, we put ourselves in their shoes– what would Tessa and Hardin be listening to?” Bostick shares. “When we first see Hardin in the film, we wanted to re-introduce his character with some badass British rock, which is how we landed on the Ulysses Wells song.”

Back with the People

Hardin gets a tattoo of barb wire and honey suc…

While Burnett also served as composer for After and was able to tap into those existing themes and expand them and experiment in After We Collided, Kessler and Bostick came in fresh to After We Collided.

“We knew it would be a challenge because the music is so important to the story. Its characters and the story’s emotional arc helped us create a direction for the music.” shared Kessler. “The series has a die-hard fan base so it was important to us to make sure they would love the soundtrack. We love the process of discovering emerging talent and hoped the fans would be excited about discovering many of these artists too.”

The fans have definitely enjoyed discovering new artists featured in the film. Kessler and Bostick found 23-year-old singer songwriter EZI and featured her track in a big moment between Tessa and Hardin at the end.

“There’s not a lot of dialogue and the song had to compliment the scene and wrap up the themes of the film perfectly,” Kessler recalled of challenge. “We discovered the artist EZI, who had recently released a song called ‘Afraid Of The Dark’ and it hit on all the things we try to do as supervisors, which is to say it both added to the story and was a big discovery artist for the fans.”

Afraid of the Dark

Since the release of After We Collided, the team has received such positive feedback from fans that it inspired them to think about ways to continue the musical story of the film. They reached out to EZI and just last week released a lyric video that captures moments from the movie along with the song.

Kessler also teased a new acoustic version of ‘Afraid Of The Dark’ that will be released soon, along with another video.

The soundtrack and that new acoustic version of ‘Afraid of the Dark’ will have to tide fans over until the third and fourth installments of the film franchise arrive, which Kessler and Bostick via Heavy Duty Projects are already working on as you read this. Filming reportedly began last month, so pending any Covid-related delays, fans might be able to see the third installment, After We Fell, in the latter half of 2021.

One thought on “After We Collided’s Seductive Soundtrack”