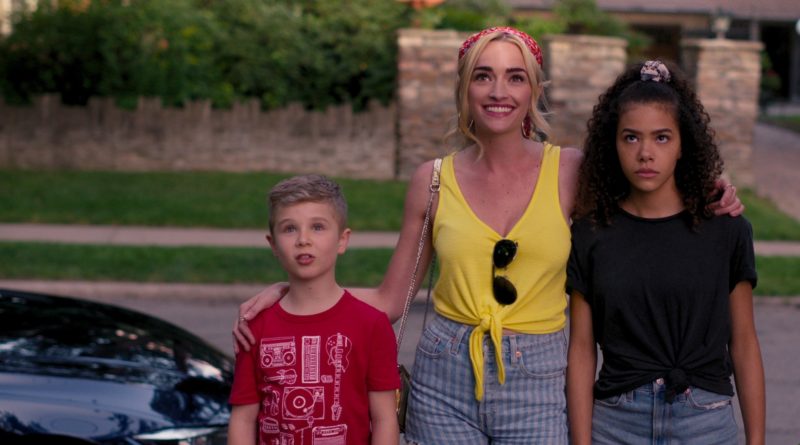 While the trailer for Ginny & Georgia might mention Gilmore Girls, you’re more likely to pick up on Pretty Little Liars or Desperate Housewives vibes when watching Netflix’s new mother-daughter drama. But one thing all of these shows have in common: a strong soundtrack to support the storytelling. Music supervisor Kaya Pino shares how she approached shaping the sonic personality of the new series that premiered today.

Ginny & Georgia follows a sassy and strong young mom and her teenage daughter moving to the small town of Wellsbury, Massachusetts. Plagued by a dark past, young mom Georgia pursues a positive new love, while her daughter Ginny tackles issues with her identity and the difficulties of being a teenager. They’re starting a new life full of adventures and struggles, so the soundtrack had to match. Full of fresh voices like Ralph and Logan Richard, the sound of the show is fun and young, with lots of strength and attitude.

“I couldn’t wait to get my hands on the music for Ginny & Georgia,” shared Pino. “The show’s leadership gave me an amazing world to play in and trusted in my sonic vision.”

Pino collaborated with the showrunner and creator by sharing songs and playlists, experiences with music and festivals to feel out the music that would work best for the show.

“There are a lot of songs in the show that were a part of my real life,” said Pino. “It was great to share those tunes with this setting.”

In fact, Pino herself felt a personal connection to this story when she first read it. Her boss at the time had emailed over a pilot script that he’d received that he thought would be a good fit for her.

“I read the script and immediately fell in love, it was smart, had great references and exciting characters – I knew I needed to be a part of this project,” recalled Pino. “As a mixed race woman I really identified with Ginny’s experience and felt a kinship right away, I was excited at the opportunity to support her story.”

Pino also provides a female voice at the creative table. On a show presented from the female perspective, created and run by a team of women, having a female music supervisor brings authenticity to the musical choices in Ginny’s and Georgia’s world.

Below Pino takes us through some of her favorite music moments from Ginny & Georgia. For the complete list of songs in each episode, check out Tunefind’s Ginny & Georgia soundtrack listing.

Kaya Pino: From the onset of this episode Ginny & Georgia talk about beauty and how it can be used as power. For Georgia she knows how to harness it and Ginny doesn’t feel that she has it. I wanted to highlight Ginny’s feelings with ‘Malibu Barbie’ by Miya Folick played while Ginny observes the role of beauty in her new friend group. The song speaks to the pursuit of these often unrealistic standards asking “Teach me how to be a woman,” while also unsure of whether these things solely make up a woman.

M.A.N.G arrive at school for the Sophomore Slee…

KP: One of my favorite movie genres is the 90’s teen movie, great fashion, a bit dark and amazing music. There is nothing like a clique strutting down the hallway in slo-motion, needless to say I’ve been waiting for the day I would work on a moment like this. The moment arrived with the scene in episode 103 when M.A.N.G. – our teen clique – arrives at the Sophomore Sleepover in matching t-shirts to rapper Dai Burger’s attitude packed song ‘Class President’.

KP: The Britney moment at Brodie’s Halloween Party was a big one for me having grown up as a fan since the start of her career. The initial thought was to incorporate multiple songs for the grand entrance to nod to all of M.A.N.G.’s different Britney costumes but in the end we needed to go with only one song. The song I chose was ‘Gimme More’ by Britney Spears. In the pitch I remember referencing how this song fit into Britney’s career, a comeback, the VMA performance, the music video featuring a dark-haired Spears to make the case. The real sell of this track though was the iconic line “It’s Britney Bitch.”

Max is setting the mood for Sophie.

KP: This scene is a sweet glance into young love, it’s the first time we see Max and Sophie together as a couple. Max is nervous and overthinking things but Sophie calms her down and the audience gets a feel for their relationship. I wanted to make sure to go with a queer artist for this first moment of intimacy between Max and Sophie. I first took notice of King Princess when her single ‘Pussy is God’ came out, I loved that it had sampled ‘Oochie Wally’ by Bravehearts and Nas which is a favorite of mine. ‘Holy’ is sweet and sensual. I thought it was a great fit from King Princess’s catalogue.

KP: Throughout the series Ginny moves between feeling different and not understanding of her mother to finding similarities and embodying Georgia’s spirit. During this scene the audience really sees the Georgia in Ginny as Ginny takes matters into her own hands – She protects her mother, takes care of her brother but does it in her own way. Diana Gordon is an amazing songwriter and artist who’s EP Pure shares the complicated mix of love and pain found in family which applies well to the Millers.

And, for you Gilmore Girls fans, Pino shared one song that ultimately didn’t make it into the show’s karaoke scene, but almost served as a great homage to Lorelai.

“As a Gilmore Girls stan I wanted to pay a bit of homage to the show and have Georgia sing ‘Walk Like an Egyptian’ by The Bangles which is a favorite band of Lorelai and an important moment in the first season,” said Pino. “We ended up with some fantastic songs for our karaoke scenes and Georgia didn’t end up singing, but this would have been a great Easter egg.”

And, as always, Tunefind has your complete Ginny & Georgia soundtrack details, with scene descriptions and links to listen on your favorite music service.