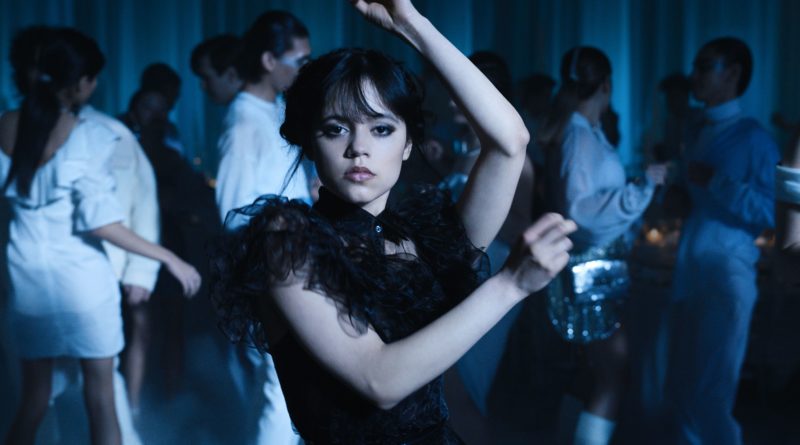 Netflix’s Wednesday has been steadily breaking records and gaining popularity since its 8-episode premiere hit the streaming service on November 23, 2022. The series has already surpassed 1 billion viewing hours, joining the ranks of popularity that only series such as Stranger Things and Squid Game has seen.

In the first 2 weeks after its release, Wednesday has claimed no less than at least 4 spots on Tunefind trending charts. Although Wednesday herself may be cold and somewhat emotionless, this series’ soundtrack is anything but. Below are the fan-favorite songs from Wednesday, with some behind-the-scenes insight from the music supervision team of Jen Malone (music supervisor), Nicole Weisberg (music supervisor), and Sarah Chapeck (music coordinator).

Right away fans were fascinated by the cello cover of ‘Paint it Black’ featured in the first episode of the season. Topping the Tunefind trending chart in the first week after it premiered, this instrumental cover of a Rolling Stones’ classic was a stand out moment. Tunefind was able to speak with the music supervision team of Wednesday to get the inside scoop behind this on screen moment.

Wednesday’s character is a virtuoso cello player and Jenna Ortega (who played Wednesday) took cello lessons while filming in Romania to bring authenticity to the performance. ‘Paint it Black’ was scripted in and is an iconic Rolling Stones song that is instantly recognizable and captures Wednesday’s style and edge with a classical, old school spin.

Wednesday does her own routine at the dance.

‘Goo Goo Muck’ stole the number 1 spot on Tunefind trending chart in the 2nd week after the series release as fans continued binging the Netflix original. In an instantly iconic scene, Wednesday steals the show with a one-of-kind dance accompanied by The Cramps 1981 single. Wednesday actress Jenna Ortega choreographed her own dance for the scene which prompted the music supervision team to select the track early in production.

The team explained how the song needed to feel true to her character and be anything too current or top 40. After pitching a few options, Miles [Millar], Al [Alfred Gough], Tim [Burton] and Jenna [Ortega] landed on The Cramps. The song’s fun, quirky, goth vibe lended itself perfectly to her choreography, while also serving as a nod to the older generation that grew up with the Addams Family. “It is always exciting to introduce younger generations to classic bands like The Cramps from the 80s.”

Wednesday goes to the town square.

In the number 2 spot on Tunefind trending chart was ‘Space Song’ by Beach House. In episode 3, the track accompanies the landscape of the town of Jericho and sets up an eerie feeling for the upcoming mayhem when Wednesday lights a statue ablaze. The music supervision team provided Tunefind with some insight behind the placement in the episode stating, “’Beach House’ are huge Tim Burton fans and were thrilled to have their song in the series.”

Four out of the eight episodes are directed by Tim Burton, who also serves as executive producer. Burton is well known for his gothic fantasy and horror films such as Beetlejuice, The Nightmare Before Christmas, and Sweeney Todd: The Demon Barber of Fleet Street. Wednesday marks Burton’s first real television work in nearly 40 years, since he directed episodes of Faerie Tale Theatre and Alfred Hitchcock Presents.

If I Be Wrong

Wednesday goes to the mayor’s funeral.

This melancholic and delicate track is heard in the later part of the season as Wednesday attends a funeral. Sarah Ramey is a writer and musician (known as Wolf Larsen) living in Tucson, Arizona. ‘If I Be Wrong’ was released in 2011 on Wolf’s one solo album, Quiet at the Kitchen Door. ‘If I Be Wrong’ is the most listened to track on the album and currently boasts over 9 million streams. The track landed in the #3 spot on the Tunefind trending chart shortly after Wednesday premiered.

Wednesday types on her gramophone.

Wednesday and Enid talk in their dorm room.

Episode 4 featured a deeper cut, from Puerto Rican singer Carmita Jimenez. Actress Jenna Ortega spoke of the importance of exploring the characters heritage stating, “Wednesday is technically a Latina character and that’s never been represented. So for me, any time that I have an opportunity to represent my community, I want that to be seen.”

Wednesday talks to Bianca outside the dance.

‘Blood’ by Exhibitionist landed in the #6 spot on the Tunefind trending chart soon after Wednesday aired. This dreamy EDM like track was released in 2018 on the artists EP titled, Let Go Of Love. Sydney multi-instrumentalist and singer, Exhibitionist, who goes by Kirsty Tickle off the stage spoke of her debut EP stating, “Let Go of Love deals with longing, heartache, and reflects on my own failures and mistakes.”

Wednesday drops fish in the pool.

Featured in the official trailer and early on in the first episode, this unique track landed at #10 on the Tunefind trending chart. ‘Non, Je Ne Regrette Rien’ is a French classic that has become recognizable to many fans due to its frequent appearances in popular movies and TV series. Meaning, “No, I do not regret anything,” ‘Non, Je Ne Regrette Rien’ is a French song composed in 1956 by Charles Dumont that provides a tongue and cheek moment as Wednesday delivers a deliciously wicked prank that ends with her expulsion from school.

Check out Tunefind for all the songs from Wednesday season 1.

〉Full list of songs featured in the Wednesday soundtrack

〉More music by The Cramps

〉More music by The Rolling Stones