Netflix’s cult hit, Emily in Paris, dropped its third season on December 21, 2022, and claimed six spots on Tunefind’s trending music chart last week, including the No. 1 spot. The third season gave fans plenty to follow, including its emblematic fashion, splendid scenery, and even a jaw-dropping season finale cliffhanger. Known for highlighting French music, last week’s most popular song comes from a French electronic musician and songwriter.

Gabriel reveals the truth about Camille to Emil…

Season three approaches its end as Emily and Gabriel have a heartfelt conversation. That is before Gabriel (played by Lucas Bravo) drops a bombshell that elicits an “Oh, my God” from our main character, Emily (played by Lily Collins). ‘Enid & Rebecca’ can be heard immediately following Emily’s last line of the season. The track’s slow and steady beat and choral work begin while the audience digests the shocking turn of events. Although the rhythm is upbeat, the vocals balance the energy leaving the song able to soften the blow of an abrupt plot twist.

Les Gordon took to Instagram to share how he was honored to have his song close out the season, captioning his post, “I have the honor to close out the final season of Emily in Paris, on the final episode, the final scene with my song ‘Enid & Rebecca’ for those who will finish the series! You can still go check out my clip in stop motion available on youtube.” 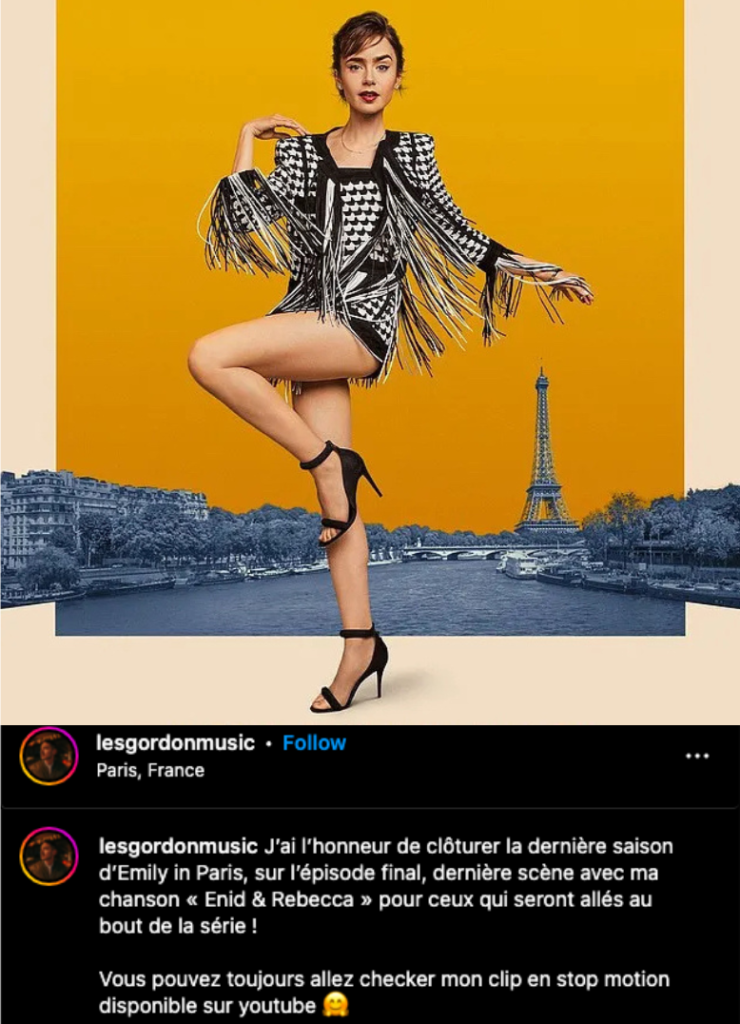 In addition to his placement in Emily in Paris, Les Gordon has also received placement in the 2019 Netflix film Velvet Buzzsaw.

〉Full list of songs featured in the Emily in Paris soundtrack