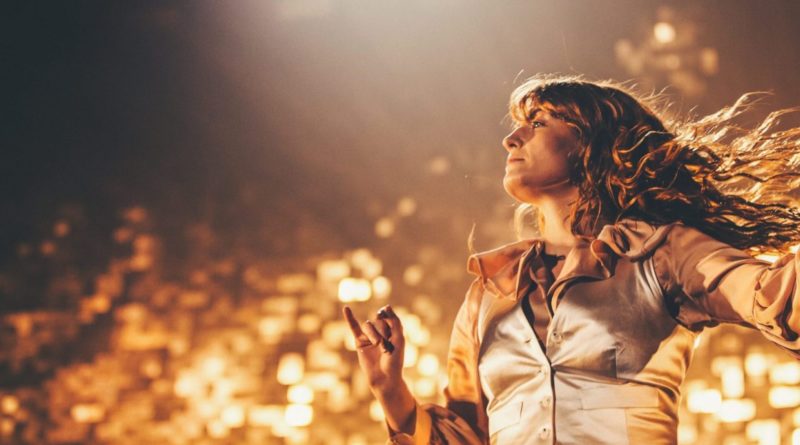 Game of Thrones fans are watching and listening closely during the highly anticipated final season, looking for clues to how the epic fantasy series will end. The second episode lit up on Tunefind and takes Top TV song last week with a haunting Westerosi ‘traditional’ song sung by Florence + the Machine.

Jenny of Oldstones (Game of Thrones)

by Florence + the Machine

‘Jenny Of Oldstones’ was specifically written for the series, pulling the lyric, “High in the halls of the kings who are gone, Jenny would dance with her ghosts,” from George R.R. Martin’s Song of Ice and Fire novels.

One version of this tragic love ballad is sung by Podrick Payne (actor Daniel Portman) partway through the episode as many of the key characters contemplate their fate during the tense night before the Battle of Winterfell. Florence’s version comes in after a dramatic fade to black at the end of the episode, playing throughout the end credits and giving fans lots to speculate about as they impatiently waited for the battle in the next episode.

This tragic love story tells the tale of Jenny–who might have been a witch or one of the Children of the Forest–and her Targaryen prince who abdicated his crown to marry her, only to die in the fire at Summerhall. Fans have numerous theories of their own about Jenny and the song, adding to the mystery and anticipation of Florence’s version.

Like everything else around this final season, the GoT camp stayed tight-lipped with their request, asking Florence Welch to record her interpretation without sharing details about the episode or significance of the song. Welch told the New York Times, “They just had a simple, stripped back, lilting melody. The notes of it sounded like a Celtic folk song to me. I thought it was really beautiful.” Florence shared how she wanted to “retain the ghostliness of it.”

Fans were entranced. ‘Jenny Of Oldstones’ beat the Shazam record – previously held by Adele’s ‘Hello’ – for most Shazamed track in the first 24 hours after release. ‘Hello’ was Shazamed 200,000 times within the first 24 hours and ‘Jenny of Oldstones’ hit 300,000. Not only that, but the track took less than 48 hours to become #6 on Shazam’s Worldwide Top 10 chart. And all based on this epic television placement, rather than a traditional album or song release, which is unprecedented.

Game of Thrones music supervisor Evyen Klean of Neophonic shared with Tunefind, “We are so happy GoT fans love Florence’s version of ‘Jenny Of Oldstones’ as much as we do.”

GoT creators David Benioff and Dan Weiss, who penned the song with the help of Martin’s original lyrics and composer Ramin Djawadi, stated together, “We’ve always been huge fans of Florence’s music. So the opportunity to hear her otherworldly voice on our show was always at the forefront of our minds. We’re still pleasantly shocked that she agreed to sing ‘Jenny Of Oldstones,’ and we’re in love with the result.”

In an incident she doesn’t recall, Florence Welch was originally approached in season 2 of the series to record the infamous ballad ‘The Rains of Castamere.’ Although she turned it down at the time, Welch came back just in time to be the last singer to perform during the GoT end credits, according to HBO. Fittingly, Welch discovered the series several years ago and binge watched to catch up, very invested in the final outcome of the series.

‘The Rains of Castamere’ has been featured multiple times throughout the series to highlight the ruthlessness of the Lannister family, most notably as the signal that kicked off the massacre during the Red Wedding. That season two version ended up being recorded by The National, as well as by Sigur Ros on the season 4 soundtrack. Westerosi drinking song ‘The Bear and the Maiden Fair’ was performed by The Hold Steady early in season 3.

These current artists performing the ‘traditional’ songs of Westeros are the rare exceptions in the series, which typically features the sweeping cinematic score of Ramin Djawadi. One of Tunefind’s most popular composers of 2018, Djawadi’s score has been such a hit with fans that it spawned a live Game of Thrones concert tour. It’s no surprise that Djawadi’s newly released theme “The Night King,” which underscored the Battle of Winterfell in the most recent episode, has also been burning up the Tunefind charts.

〉More music by Florence + the Machine

〉Full list of songs featured in the Game of Thrones soundtrack

3 thoughts on “Top TV Song: Jenny Of Oldstones by Florence + The Machine”